Strategy gaming specialists Kalypso Media and developers Limbic Entertainment are launching into E3 2019 with the very first gameplay footage of Tropico 6 on consoles. In addition, Kalypso is thrilled to announce that Xbox One gamers can El Presidente’s latest critically acclaimed adventure right now, as Tropico 6 launches on the console’s Game Preview programme today at a special discounted price as part of Xbox’s “Deals Unlocked” E3 promotion.

The Game Preview version of Tropico 6 on Xbox One features the full singleplayer gameplay experience, with further updates including multiplayer, a random map generator and other enhancements to arrive at a later date, ahead of the game’s full release in Fall 2019.

The news follows the highly successful launch of Tropico 6 on PC, which has been extremely well received by fans and critics alike. The console version of Tropico 6 will bring this high-end strategy experience to PlayStation®4 and Xbox One with a refined, accessible and fully-optimized control scheme for console controllers and adds to Kalypso’s growing library of high-quality console strategy games like Tropico 5, Sudden Strike 4, Railway Empire and Dungeons 3. 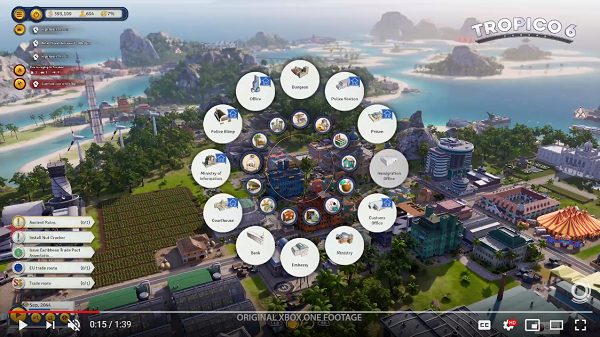 About Tropico 6
El Presidente is back! In times of political turmoil and social unrest, the people are calling out for a visionary leader, one who will steer the fate of their country with foresight and ingenuity. Prove yourself once again as a feared dictator or peace-loving statesman on the island state of Tropico and shape the fate of your nation through four distinctive eras. Face new challenges on the international stage and always keep the needs of your people in mind.
For the first time in the series, manage extensive archipelagos, build bridges to connect your islands and use new means of transportation and infrastructure. Send your Tropicans on raids to steal the wonders of the world, including the Statue of Liberty and the Eiffel Tower. Customize your palace at will and give election speeches from your balcony, to win the favor of your subjects.